That Guy Knows Who Buck-Tick Are

Kame's back again! (soft of.)  To recap: for those of you who have been following This is Not Greatest Site since the beginning, you may recall that Kame was the original website designer, or, in hokey 90's terms, the original webmistress.  She quit the webmistress position at the end of 2009, and Cayce has been managing the site largely independently since that time.

Why did Kame quit, you ask?  The short answer is, the Silicon Valley hotshots gave her an offer she couldn't refuse.  Now she's located in the Bay Area, where she occasionally samples Jack Dorsey's curated whiskey collection, among other duties...and now those duties include a return to the NGS team as one of our international correspondents.

To celebrate her return, this week at NGS/Blog-Tick, we're running a Kame special! Over at NGS, you can read her extended article on Harajuku fashion in the USA, ten years after the visual kei boom. Here on Blog-Tick, Kame is going to tell you a story about That Guy.

All the pink text was written by Kame. You're welcome.

Oh hey Blog-Tickers. Kame here. This writeup is way overdue, now that I realize the Skinny Puppy concert was like, a month ago, but when I told Cayce the story (a month ago) Cayce asked me for a writeup and I'm a little scattered with deadlines, but hey I wrote it anyway! Just for you dear lovely readers!

Skinny Puppy played at the Fillmore in San Francisco last month, and Tokyo Dark Castle buddies BAAL were there as the opening act. So I was totally out showing Tokyo goths how to party San Francisco style, right? (That’s right, Genet and Toll shooting the shit and discussing their last app ideas over artisanal craft cocktails inside a bar with reclaimed wood and brushed chrome interior)

I missed the concert. In fact, I was holed up uncomfortably at a work dinner, just two blocks down from the Fillmore. Did I cry? Yes, I cried. (Not really. But I made angry noises)

Why did I cry? I cried because I don’t particularly enjoy socializing with my coworkers. But in situations like this, when I can’t escape, and crying isn’t really socially acceptable, I resort to drinking.

Why do I resort to drinking?  Why, because I’m a Buck-Tick fan, and Buck-Tick have taught me that drinking not only solves all problems, but will also make me as sexy as Acchan-chan if I do it enough.

I only mention I was drunk as an alibi.  Because if I weren’t drunk, why would I have been speaking to That Guy?

Who is That Guy, you ask?  You shouldn’t have to ask.  That Guy knows eeeeeeeverything. You know, about that band. Before you did. And that club. Before you went there. Except you never went there because that party isn’t going on anymore.

Except he doesn’t really know much of anything, but everyone else at the office knows less, so they just believe him, and he rides around all puffed up on his falsely cool ego.

That Guy is in his early/mid thirties and has a large and very professorly-like beard. He overpronounces everything he says, just to emphasize how educated and articulate he is. “Overpronounce” is a word I quickly made up just now, because I can't think of anything else to accurately describe the annoying and asinine manner in which he speaks.

He knows more about the world than you do, because he goes to Burning Man every year and does a lot of drugs and thinks that roughing out a dust storm because he paid a crapload of money to go out to a giant desert with no running water and “experience things” makes him manly. He also eats regularly at Michelin rated restaurants, because he has money, and because you haven’t truly experienced the world until you’ve eaten at a Michelin rated restaurant.

(Cayce Pollard will never eat at a Michelin rated restaurant. They are dangerous.)

Anyway, That Guy looooves to talk about industrial music. I don’t know why. I never knew, before meeting That Guy, that “pretentious” and “Nine Inch Nails” fit together so well in the same sentence. But apparently they can. In fact, there are not one, but two “DJs” at my office who own the entire NIN discography on vinyl and will tell you about it at any given opportunity.

So tonight, it was just me and That Guy, talking about industrial music.

“Back when I was living in London I knew a guy who toured with KMFDM,” says I. “Or wait, shit, was it just Raymond Watts he toured with? I get that confused sometimes!”

“Why would you ever get them confused?” asks he. (Girls are so cute when they are confused! They do not know as much about industrial music as I do!)

(We can actually just stop the conversation here.  He’s already revealed he doesn’t know as much as he says he does—apparently he doesn’t know that Raymond Watts was once a member of KMFDM! But that wasn’t where I was going. This time, I was gonna trip him up for real!)

“Because they did a project together with Buck-Tick!” I said, pulling my trump card.  He fell for it, hard.

“Of course I know Buck-Tick!!”

“How do you know of Buck-Tick?” I asked.

“Because they're a great band!!” he said, an edge of defense rising in his voice.

“Tell me more about Buck-Tick,” I said.

“Japanese. Been around since the eighties. Big name over there. Used to do their hair up all weird?”

He jumped in his chair. “Oh, I was thinking of someone else then.”

“I mean, I don't know all that many Japanese bands. I know the good ones of course. Melt Banana, ever heard of them? And oh, my favorite is this one called... aaah... Yamantaka Sonic Titan. They’re this very progressive, experimental group. Very creative performances. I tell you, it’s a real experience to get to see a band like that play live.”

Down the street, BAAL was still playing live with Skinny Puppy.  If I listened very carefully, I thought I could almost hear U-taro’s guttural screams echoing out into the night (girls are so cute when they scream!)  I thought of asking That Guy why, if he liked industrial music so much, he was here at this company dinner instead of at the concert.  Instead, I asked myself the same question, and began to cry into my (non Franzia) wine.

Note from Cayce: Yamantaka Sonic Titan are from Montreal. That is to say, they’re Canadian. That is to say, they're not Japanese. They style themselves “Noh-wave,” and yes that means what you think it means. Japanese pop culture references plus low-fi shrieking in warehouses, here we come.

In fact, many years ago, back when people wore leggings as pants, back when handlebar mustaches were considered acceptable day wear even for men and women unaffiliated with the gay leather bar scene, Cayce once saw Yamantaka Sonic Titan play live at a hipster warehouse party in Montreal. Like, a real hipster warehouse party, in a real warehouse squat.  As in, the warehouse didn’t belong to the hipsters, they just decided to show up and turn it into a party pad, rusted sinks, broken windows and all.

At this party, the “bar” was a plank of wood set across two sawhorses, and the drinks were just lukewarm bottles of Boreale pulled out of a jumbo-sized cooler.  The “DJ booth” was a record player on a rickety table someone had picked up off the side of the street up Rue St. Urbain during moving weekend.  The record on the player was Siouxsie and the Banshees’ A Kiss in the Dreamhouse, and the only thing that separated the audience from “backstage” were a few bedsheets strung up with clothespins.  Yamantaka Sonic Titan headlined the show, dressed in handmade paper headdresses and cheap nylon Japanese festival coats. They did funny things with light projectors and cardboard set pieces, made a lot more noise than music, and the crowd adored them. 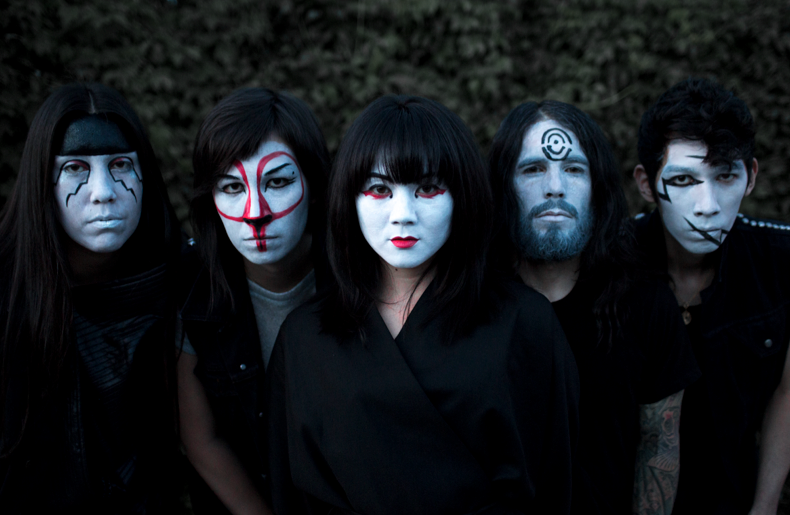