The Mortal Gets The Schaft

With the release of this quarter's Fish Tank newsletter, Mr. Sakurai's original reason for starting up The Mortal has become clear! Last time, Mr. Sakurai's stated reason for starting a solo project was "because Imai cheated on me with Lucy." But this time, trollops named Lucy appeared to be long out of the picture, so what could Mr. Sakurai's motivations be now? Was it eleven-year nostalgia, or simply the extra super-duper mortality feeling that comes with imminently turning fifty? Or perhaps, some fans speculated, at this late hour, Mr. Sakurai was finally living up to the self-centered diva vocalist stereotype, and had decided to start a whole new five-piece band as a way of showing the rest of Buck-Tick who's boss? After all, Maria Anastasia tells us that the Russian fangirl nickname for Mr. Sakurai is "Mr. President." Could it be that after fifty years of modesty, mild-mannered Acchan-chan has turned megalomaniacal?

Alas, the answer is no! In F.T. number 77, when asked why it was that he started The Mortal, Mr. Sakurai answered thus: "Around the end of last year, I heard some gossip in the wind that Imai was going to get Schaft started up again next year. So I thought to myself, 'okay, I'll just relax and rest for a year,' but that was back in March. And then Mr. Tanaka (our director), who is always being so helpful to us, told me 'since you have the time, why don't you try another solo project?' He'd gently suggested the same thing to me at the Budoukan last year, but this time, though I was in full-on vacation mode, he made my heart move a little bit. And from then till now it's just been a big to-do from top to bottom."

'A big to-do from top to bottom' is it, Acchan-chan? Well well WELL. Even if you haven't turned megalomaniacal, we'll take that from you any day!

In the rest of the interview, Mr. Sakurai gives further details about the Genesis of The Mortal (no relation to Genesis P-Orridge, sorry Anonymous.)

"It was Tanaka's idea that this time, I should make an album with a five-piece band, and play a live tour with the same five members. I chose the band name 'The Mortal' myself," says Mr. Sakurai. "11 years ago, during my previous solo project, I worked with Jake Cloudchair, Miyo Ken and Mr. Murata from my way my love. I thought that since I only have a limited time for this project, familiar faces would be best. After we decided on these three members, we were wondering who should be the drummer, when Jake introduced us to Akiyama, and then we had all the members lined up.

"11 years ago, we had only worked together for a very short time, but we shared so much inspiration even so, so this time, the planning progressed very quickly. The other members told me 'we wrote songs in your image, Mr. Sakurai.' I was very touched.

"It was Mr. Tanaka's idea that the theme of the band should be 'Mr. Sakurai's gothic and decadent outlook, in band form.'

"When you translate the word 'mortal' into Japanese, it sounds unlucky, but my interpretation of the meaning is that it means 'the essence of being human,' or, 'the quality of being a living being.' It just seemed like an easy way of explaining the idea of goth or decadence to people who were learning about it for the first time, so what I'm hoping to accomplish is to make a work that sums up 'the essence of being human' in one album."

Fish Tank went on to ask Mr. Sakurai if the Spirit mini-album would sum up the essence of being human.

"No, that's a bit different," Mr. Sakurai said. "Out of five songs on the mini-album, three songs are covers. Regarding a possible cover of 'Spirit' with Japanese lyrics, we were requested by the song's authors not to change the lyrics, so at the last minute, I made the decision to sing the song in English. I had a British native teach me the pronunciation. I think it came out well.

"It was Mr. Tanaka's idea that I should do cover songs. 'Spirit' by Bauhaus has been a favorite song of mine for thirty years. Mr. Tanaka requested that I do The Damned's 'Shadow of Love,' and I chose 'Cities in Dust' by Siouxsie and the Banshees.

"The art director for Arui wa Anarchy, Akita Kazunori, is doing the artwork for The Mortal, and as soon as he heard the band name he understood the entire concept. He even said, 'Mr. Sakurai is the only person who can make this kind of aesthetic work!' Mr. Akita interpreted this as being an opportunity for me where I only have to do exactly what I really like and want to do, so I think he's making a design that I will love."

And here's the design, kids. Shakespeare nerds rejoice - looks like all doubt that Gothique Prince Acchan-chan remains unfamiliar with Sweet Prince Hamlet has been put to rest in one fell photoshoot, though with his surprisingly positive interpretation of the word "mortal," Mr. Sakurai seems to have come down firmly on the side of "To be." 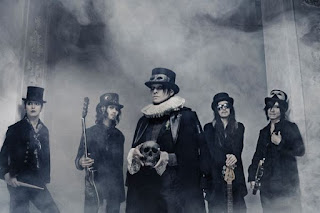 Beyond this, the title for The Mortal's full album has now been announced - I Am Mortal, a statement which puts Mr. Sakurai in the august and unfortunate footsteps of Socrates, so let's hope for his sake and our own that Mr. Sakurai can learn to be Catman to Issay's Batman and cheat mortality with nine mortal lives!

As for the gothic horror side of things, the title track from the I Am Mortal album, "Mortal," is being used in the Japanese trailer for the British gothic horror film Woman in Black 2: Angel of Death. The song will only be used in the trailer, not in the actual film. However, considering that as a part of his last solo project, Mr. Sakurai had his song "Wakusei" featured in a film called The Last Supper, which as far as we could tell from the trailer was a slasher film about the dismemberment and cannibalization of women's bodies, I'd say he's moving up in the world. A song like "Wakusei" being used for such a nasty picture seemed like some seriously cruel irony on the part of his management...so yeah, bye bye Victor, don't bother to call us, we don't miss you. Fanged ghost-nuns are definitely better.

But what about SCHAFT, you ask?  Imai has your bases covered!

"When we decided to start up Schaft again, I decided I was going to go back and listen to the old Schaft album, and I looked for it, but it wasn't in my collection," Imai told Fish Tank.

"It's not even on iTunes, even though I could have sworn it was there. But whatever. This Schaft is gonna be different...even if you call it a reunion, it's a totally different thing. Raymond Watts isn't a part of it, for one thing. It's still a unit made of up me and Fujimaki, but the other members are going to be cool, too.

"We want to play an exciting, up-tempo live show. I want something unusual. Something heavy, or dark, or scary. That kind of weird atmosphere. We haven't really figured out the practical details yet, but I'm already looking forward to it myself. I think you're definitely going to want to see this tour. After all, I think this might be the last tour ever for Schaft, so I want it to feel like a grand finale."

Fish Tank further asked Mr. Imai whether a solo project would give him the freedom to explore ideas he couldn't develop as a part of Buck-Tick.

"There's nothing I can't do as a part of Buck-Tick," he said.  "But sometimes I notice that working with different members is different from Buck-Tick, anyway. Whatever, it's natural, they are different people. Anyway, look forward to Schaft. This is gonna be great. And it's probably going to be the last time. You should see Schaft before it's too late! The members this time are going to be really interesting...I think. Anyway, look forward to this."

And here are the details as they stand now, folks!

Schaft's official website is now up at this address: http://schaft2016.com/

An article about Schaft will be featured in the same November issue of Ongaku to Hito magazine that will have a cover feature on The Mortal, so more bang for your Buck-Tick buck if you order the magazine (if you'd like to order through Cayce, email me.) Though no information about a new album is available as yet, the band's January tour dates have already been announced, as follows:

A ticket presale lottery is currently being conducted through Ticket Pia. To enter the lottery, click here. If you would like Cayce's help in ordering tickets, send us an email. And fun fact: January 27th, 2016 will be the TENTH ANNIVERSARY of This is NOT Greatest Site. We can't think of a better way to celebrate our new decade-hood than with Imai Hisashi himself! Though he may not be able to articulate details of his "heavy, dark, and scary" vision, the newly-released band photo ought to give you some idea: 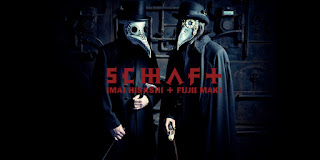 If Mr. Sakurai has gone all the way back to Shakespearean times with his Elizabethan ruff, Imai has done him one better, and gone back to the times of the Black Death. Bird masks such as these were worn by doctors during the plague years in Europe - the beaks were filled with rose petals, in hopes that the sweet smell of the flowers would keep the noxious plague humours at bay. Infectious diseases: that's not how they work, folks! But it's hard to escape the conclusion, based on these graphics, that Schaft has come along in plague masks to test the mortality of The Mortal. Will Schaft get The Mortal, or will The Mortal get the Schaft? Whose city will lie in dust at the end? We can't yet say...but one thing's certain. Even if Imai is cheating again, he's still in love with Acchan-chan.

"I looked at Acchan's website," said Imai. "It looks really cool. I think his project is gonna be amazing! I don't know which songs he's covering, and I don't want anyone to tell me. I want to listen to them for myself, and think 'oh my god, this song!!' But I wanna know. I can't wait."