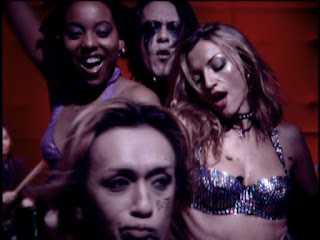 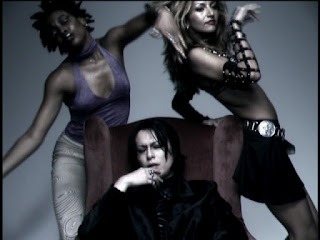 Oh my god, that was terrible.
.
.
.
If you don't get it, don't sweat it.
Also, looks like someone unfollowed Blog-Tick. I'm very disappointed in you.
Posted by Cayce at 11:08 PM 8 comments:

A window into Cayce's process

It's like a zombie movie or something! After two years of wasting away update-free...Not Greatest Site has been reincarnated in a much less colorful and less-tech savvy form, which might eet ur brainz...mainly cuz the content is way better now, if I do say so myself.
True, a few sections of the site remain under construction, and I will fill them in as time allows me, but...there is an entirely brand-spanking new archive of Buck-Tick lyrics translations for your perusal. Should take you MONTHS to get through, right? So what are you waiting for? Go start reading.
I've retired some of the old content and added some new content, but one reason it took me so long is because, Not Greatest Site really has a whole lot of content. Also for this reason, though I have been painstakingly meticulous, it's quite possible that there are still errors, typos, Imai songs credited to Hide, what have you. If you find an error, or if you find something you're not sure is an error but you think it might be an error, please email me and let me know, because no matter how many times I proofread it's unlikely I will catch them all.
To date, Buck-Tick have released more than two hundred f**king songs. That, my friends, is one BIG pack of funny fucking Valentines.
And no, I am not putting up an Acchan image gallery, so don't ask for one or I reserve the right to rick-roll you.
Posted by Cayce at 10:27 PM 9 comments:

Oh wow guys, here's some j-rock news that I jumped on before JAME got to it cuz holy crap I can read Japanese :P
As was announced on mixi news today, Dir en grey's singer Kyo has been diagnosed with vocal nodes and vocal cord damage and ordered by his doctor to take a break from singing. Dir en grey's planned March-April American tour has been canceled and all further band activities are currently on hold. The band offers their sincere apologies to the fans and everyone else, and begs for your understanding. Kyo hasn't been ordered to alter his lifestyle, except he's been advised to not to raise his voice.
I can't say this is surprising, but it does come as a slap in the face to a band that's been struggling lately, here's hoping Kyo recovers from vocal nodes as quickly as Ryuutaro recovered from Guillan-Barre. But about vocal nodes, as a singer myself, I'll say this: you get vocal nodes if you're using your voice incorrectly. Vocal nodes are injuries resulting from misuse and overuse of the voice and throat. To anyone with vocal training it's always been clear that despite his extreme power as a singer, Kyo takes supremely poor care of his voice. I don't know how much formal training he may have gotten over the years, it's possible that he did study how to use his voice better but the style of singing he does is the kind of thing that will wreck your throat no matter what you do.
However, a lot of singers who don't shriek and growl at the top of their lungs on 50-stop world tours get vocal nodes anyway, because they lack sufficient training. Once you learn how to use your voice correctly, if you are singing in a melodic style rather than screaming your lungs out, there is no reason why you should ever develop vocal cord damage. Singing should never hurt. If it hurts, you're doing it wrong and you'll reap the consequences. Buck-Tick fans can hear where Sakurai started taking voice lessons: it was right around the time the band was working on Taboo. If you don't know what I'm talking about, listen to "Dream or Truth," then listen to "Jupiter." Hear the difference there? And Sakurai has had some issues with his voice over the years but he's got damn sight better vocal technique than a lot of rock singers out there...why? Because he got voice training. It's a big reason why he sounds so good. A lot of rock singers never get any training and however good they sound at first, they live to regret it.
So I guess where I'm going with this is, if you are a singer but you haven't had formal voice training, you should seriously consider getting some, especially if you're planning on singing a lot in the future. It doesn't have to be Julliard. Even a few short lessons can work wonders for your sound and your throat, so you don't end up sounding like this guy.
Posted by Cayce at 10:18 PM 15 comments:

In addition to the bandwidth-heavy and copyright protected image gallery on the HMV Japan website, Buck-Tick Victor's YouTube channel has uploaded a trailer advertising the new Buck-Tick best of the Victor years box of discs that will be released on Mr. Sakurai's birthday in order to carpetbomb your bank account so you can't afford to send Acchan a statue of your body cast in chocolate for his birthday this year, which is really too bad, I was looking forward to seeing those, it would be like an edible wax museum, but creepier.
Speaking of which, there was a wax figure of Ryuichi Sakamoto on display at the wax museum on Odaiba for several months last year, but I didn't go see it even though all my YMO-fan friends were dying to take me, mostly out of lack of free time. I think I could handle a wax Ryuichi, but I'm not sure I could handle a wax Imai.
Anyhow, the HMV gallery hasn't been rick-rolled yet, and the trailer has titles that are almost as 80's as the videos it contains, so what are you waiting for, go squee over them.
Also, they are currently taking applications from Buck-Tick copybands who want to be on the new tribute album, so if you think you can do a killer Acchan impersonation, what are you waiting for?
Posted by Cayce at 8:10 PM 3 comments: 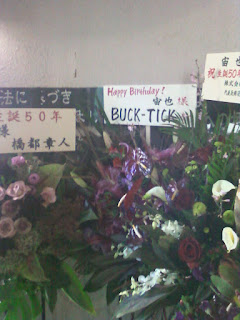 ...at Shinjuku Loft. Once again heavy on the burgundy lilies, an excellent choice, though at this event it had stiff competition and I think the mysterious Reika's giant globe of red roses may have won (Auto-Mod was up there too.) Happy 50th birthday dear Mr. Chuuya! The next one up to bat at the half-century plate is Toll!
Posted by Cayce at 11:32 PM No comments:

More on Not Greatest Site

I know you're all curious to hear how the new Not Greatest Site is progressing...
You'll be pleased to know, I expect it to be ready within the next few weeks. I have uploaded an entirely new archive of Buck-Tick lyrics translations, as well as some new content, so stay tuned! The changes I have left to make are mostly of the cosmetic surgery kind. I promise you, this new site will come out looking better than Kim Kardashian.
And, I'm very touched by your support. Except for Facebook, the internet is so faceless, it's hard to know how many people my content reaches. Hearing from all of you gives me the warm fuzzies! I'm happy to know that some of you have been Buck-Tick fans for more than five minutes, and I'm also pleased to know that you're using my work to help you study Japanese. At those Japanese-studying NGS fans...if you really want to get good at Japanese, avoid using romaji and stick to kanji as much as possible, seriously, you will learn far more. Sorry about all the kanji typos that abounded in the old site, I confess a lot of those kanji were not typed by me but this time, I hand-typed all the kanji with a Buck-Tick tour towel wrapped around my head to soak up the sweat, so things should be much better this time!
At soju/sake: bonus points for a great username. To respond to your comment Imai-style, in the body of my post: thank you for coming out so ardently as my secret admirer, and thank you for actually reading the translation notes. A lot of times the notes take me longer than the translation itself, and you may be pleased to hear I've written some new notes for the new site. I think the new note for "Sid Vicious on the Beach" may be longer than the lyrics to the song itself. If you are seriously curious to hear my comments on other Buck-Tick songs, let me know which ones and I will see about making postings on Blog-Tick. There's a lot of stuff I haven't included in the translation notes, and in any case, and it sounds like it could be an excellent ego-waving pretentious web series opportunity. Also FYI, personally I prefer sake to soju, but that's just a personal opinion and not meant to offend anyone.
And speaking of offending people. If you're worried I've been too nice lately, being all mushy about y'all appreciating my work and such, if you're worried I'm losing my caustic touch just like a big bottle of flat soda, don't worry. I promise you the new site is chock full of lots of fully dissociated strong acids and new great ridicules. Cause don't we all love a good ridicule?
Thought so.
Thanks, not greatest fans.
Posted by Cayce at 1:21 AM 7 comments: