What a shame that this post is a few days late. We wish it were not so, and yet, to take the lessons of Mr. Sakurai's lyrics to heart is to prioritize living in the moment, the ephemeral joy of being, over the fussy recording of events. So, we took it to heart, and into our own hands, to celebrate Mr. Sakurai's birthday the way it should be celebrated properly: by spending the afternoon at Tokyo's one and only Alice in Wonderland-themed cat cafe. Mr. Sakurai has now threatened numerous times to open his own national chain of cat cafes, claiming that the danger of him actually doing so is "very real." 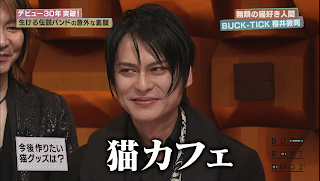 So, food for thought, Mr. Sakurai - how would you beat this? We know you could. Get brainstorming! And the rest of y'all, abandon yourselves to your squeals of "kawaii!" We assure you that however soft and fluffy these cats may look on film, they were 500% softer and fluffier in person. Plus, how about that decor? Good thing Mr. Sakurai's probably never been here, otherwise, he might never leave! (And Mr. Sakurai, if you're reading this, please enjoy these cat pics as a birthday present from us.) 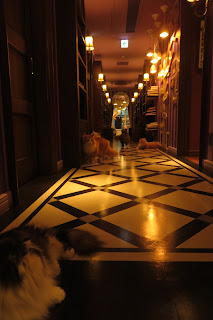 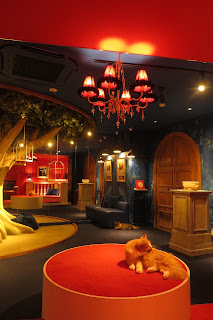 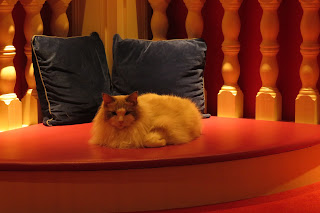 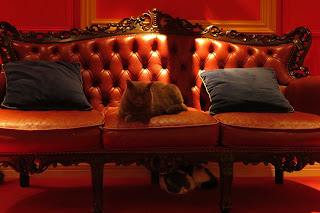 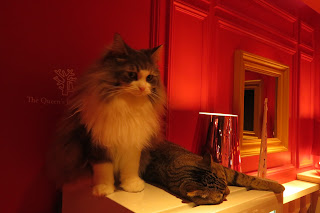 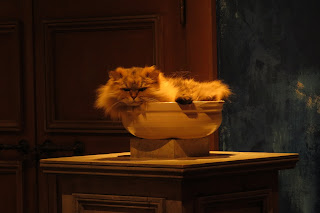 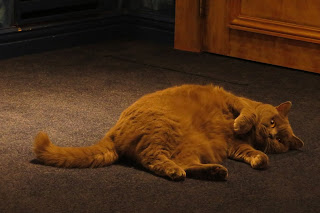 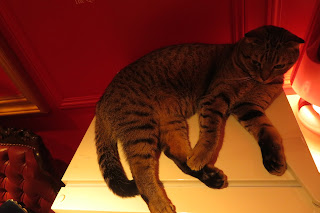 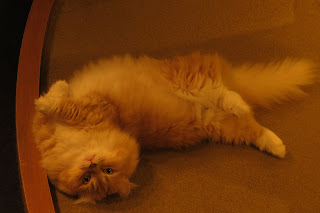 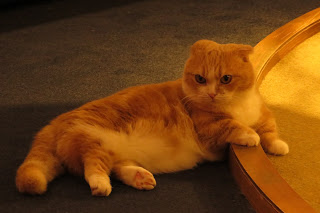 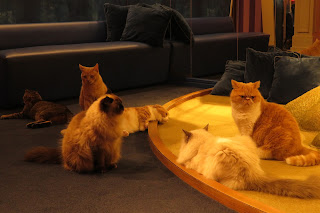 Lined up for the dinner time show! 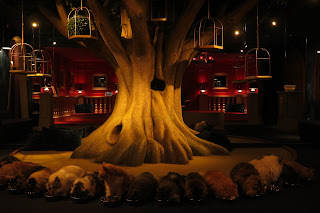 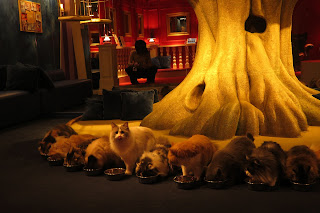 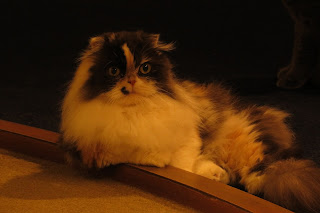 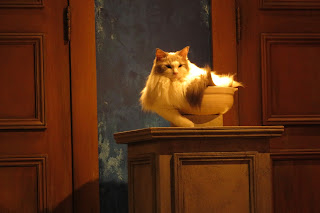 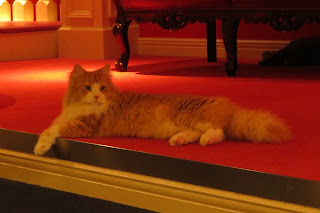 And a warning to all customers about taking care of their teas and coffees. 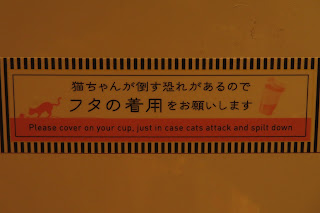 Happy birthday, Mr. Sakurai. Hot on the heels of a year of repdigits - Buck-Tick's 22nd album, released on their 33rd anniversary, Mr. Sakurai turns 55. May the magic spread forth through Buck-Tickistan to cover the world in this much love. Happy birthday! 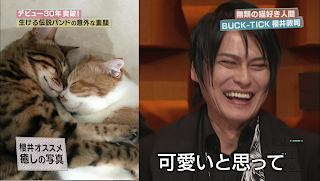 .
.
.
In other news, it has been announced that Mr. Sakurai will be releasing a "produced by Mr. Sakurai" corsage, as birthday goods. However, no other information save vague concept art has been released since the initial announcement was made, on March 7th, Mr. Sakurai's actual birthday. Why bother announcing the damn thing if none of the details have been determined? Well, it's not much in the way of birthday goods if you don't at least announce it on the birthday. Guess Cayce isn't the only one procrastinating. Sorry, fans! Thank you for your patience. In fact it wasn't procrastinating, it was... mountains of other work... in Mr. Sakurai's case it was probably mountains of cat toys... in any case... blah blah blah, we will report on this developing story as more details become available.
.
Posted by Cayce at 1:42 AM 9 comments:

This is NOT Greatest Site 15th Anniversary

Hey, folks! How are y'all holding up? We hope you're all staying well, staying warm, and staying stimulated. Not stimulated enough? We have something to help you with that - the translated lyrics, kanji and romaji for "Dance Tengoku"! Are you, too, sick of gender labels? Are you, too, just itching to get sweaty and dance at a party where everyone's hot, everyone's sweaty, and nobody's socially distanced? Well head on over to This is NOT Greatest Site and indulge yourself in a fantasy world that may seem impossible at this moment but if we keep praying and touching ourselves, it will come back! Pop the champagne, take off your clothes and dance alone in your room in front of your stereo with "Dance Tengoku" on repeat at full blast, to celebrate with us, because...
Today, January 27th, 2021, is the 15th anniversary of the launch of This is NOT Greatest Site!!!
Yeah, we can't believe it either. When we started the site back in 2006, we sure as hell had no idea where we'd be or what we'd be doing in 2021, but if we'd had to take a guess... we probably wouldn't have guessed that we'd still be running the site. We surely had no idea what it would become. The whole thing started as a casual project to make fun of j-rock fan sites, while bringing Buck-Tick to the world in English translation. It's been thanks to you readers that over the years we've grown as we have. Hearing from so many of you in so many countries around the world has turned out to be the most rewarding, exciting part of the whole project. Hearing about your countries, your thoughts and feelings about music, art, and life, has been special like nothing else. Since we started NGS, we've watched Buck-Tick's overseas fandom go from a few dozen people to thousands, maybe tens of thousands, like a firework exploding in slow motion. If we've had any part to play in that explosion, we're honored beyond words. Because from everything y'all have written to us over the years, it's clear that y'all really, truly love and appreciate Buck-Tick the way they deserve to be appreciated and loved. Thank y'all! We've been doing this for y'all. We wouldn't still be here without you.
Also, thank y'all for your great patience with our health struggles and our lack of updates. An even bigger thanks to the many of you who've supported us on Ko-Fi. Your support has been an inspiration to us to keep going even through some very difficult times. The internet may be full of trolls and bots and illiterate flamers but we wouldn't know that, because y'all are so smart and polite and friendly. Thanks for being the best readers ever♥
Anyhow, please feel free to let us know in the comments (or in an email) how long you've been reading the site, what your favorite parts are, and what kind of content you'd like to see more of. Anyone on here who's been reading since the beginning? Anyone on here who just discovered the site recently? Anyone on here who's been listening to Buck-Tick since they were a child? Anyone on here who's younger than NGS!? Let us know!
We wish we had more to share on such a special day, but we don't, really, so we'll leave y'all with this. 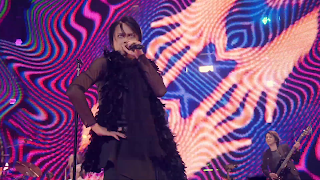 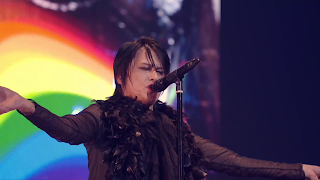 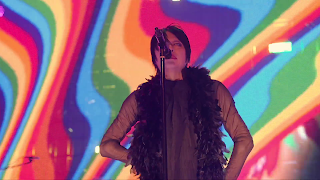 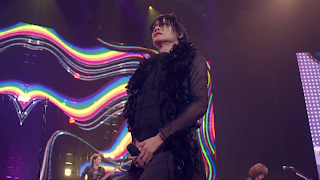 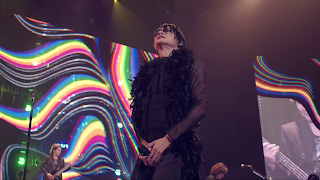 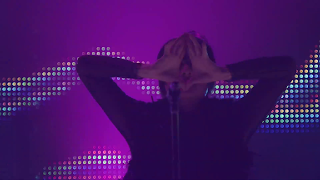 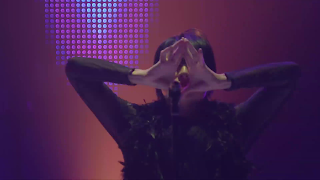 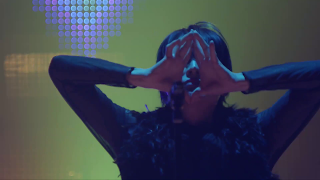 .
.
.
(Images taken from 'Gender Doesn't Matter in Sex Paradise: Hermeneutic Analysis of Sexual Semiotics in the Textual, Visual and Physical Works of Atsushi Sakurai,' published in The Journal of Queer Sexological Studies vol. 69, University of Buck-Tickistan.)
Update: holy crap, Blogger is telling us that this is the 666th post we've made on Blog-Tick to date. How serendipitous that it was this one!
Posted by Cayce at 5:01 AM 15 comments:

The Questions in Question, and Other Sad Trombones (Happy New Year 2021)

Happy New Year, folks! We... guess? With the pandemic raging worse than ever, and many places under lockdown, it's looking like a dark winter, especially in the midst of a "fashion" crisis of puffer jackets that look like black plastic garbage bags stuffed with toilet paper, plus the question of why the Fashion Police haven't started arresting anyone who hasn't upped their mask game from "white paper sanitary napkin wrapper" to "re-usable, matches my outfit and actually fits my face." Having to wear a mask all the time sucks enough without looking like you mummified yourself in all that toilet paper you panic-bought last spring! Look at Imai Hisashi, kids. Imai Hisashi is a role model. You should do what he does. Put on your Swarovski mask and your giant platform boots and pandemic down the street like you're the hottest virus to infect the catwalk since Agent Smith. Imai Hisashi can jump, twirl, and kick in those boots, while playing guitar. Could he also infect the Matrix and make a gazillion more copies of Imai Hisashi? No question! So what's your excuse, eh!?
Anyhow, apologies never made up for late trains, but we apologize again for not keeping up with the blogging. For those of us who were worried for us, thank you for keeping us in your thoughts. Physically, we're doing better. Emotionally, well... who the fuck is feeling happy and well-adjusted right now? Raise your hands, you chipper lying overachievers, and we'll call you a pack of chipper lying overachievers! There's no shame in admitting boldly that wish you could sleep all day because it beats being awake. Is this what Mr. Sakurai meant by "Moonlight Escape"? How did he know?
In any case, before we get back to the Abracadabra translations (and we WILL get back to them even though we've got nothing on the OFFICIAL translations sucks to be us but more on that later), we'd like to address some questions we've gotten from you readers.
First, Yemitza from Venezuela would like to know, what sorts of too-expensive-to-buy merch did Buck-Tick release in fall of 2020?
Thanks for asking, Yemitza.
First, Imai Hisashi released this pretty cool embroidered bomber jacket, in both black and white, as a collaboration with fashion designer Takeo Kikuchi, whose Meiji Street boutique you could visit, if you were allowed into Japan as a foreigner, which you're not, because all gaijin have coronavirus. Also, you don't have enough money to buy this jacket, because it's 70,000 yen and that's more than your rent. With unicorns and sparkles, fuck you, Yemitza :) Have you been feeling like your life is a meaningless slog from cradle to grave and your grave is probably very close at hand because you'll probably almost certainly die of this virus but at this point you don't even care anymore because fuck this shit? Congratulations, Yemitza. You're correct! Take 50xp, but no gold coins, because you don't have enough money to buy this jacket. 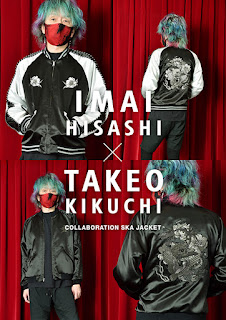 Second, Buck-Tick released these fancy earbuds, as a collaboration with Tago Studio Takasaki, a recording studio in Takasaki, Gunma, near the band's hometown of Fujioka. These hot-shot, hand-lettered bad boys are lusciously insertable into your ear canals, developed as the small, lipstick-case-vibrator versions of the big, insert-your-ears-into-their-luscious-folds studio monitor headphones used at Tago Studio. The Tago Studio T3-02 earphones feature "box in box" technology, with an inner headphone core inside an outer box, designed to silence any sound from the outside world to less than a faint whisper, so that all you hear are the slip-sliding glissandos and falsettos of Buck-Tick in your box. Perfect for amateur sound engineers and pornographers alike. Do you like that, Yemitza? Do you want those earphones inside your ears? Do you want them inside your ears right now? Welp, too bad! Those earphones are the Shinjuku hooker in this tale and you cannot afford her. She's 68,200 yen, Yemitza. Sayonara! 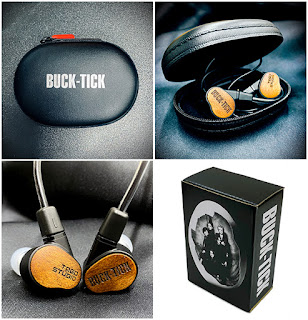