Too Much Buck-Tick News!

This week has brought us just about too much Buck-Tick news to post about on Blog-Tick!  But since the numerous magazine and radio appearances are fairly explicit on the Buck-Tick homepage even to people who don't speak much Japanese, I'm going to just let y'all go check that small news for yourselves, so I can focus on the BIG news, which is: Buck-Tick has announced the track list for their first tribute album, as well as the guests for the Parade Tour 2012, who will also all be performing at the Festival Tick-Buck Parade On 2012.  And for those of you who got interested in Buck-Tick because you were/are visual kei fangirls, rejoice and throw your hats in the air, because this guest list reads like Visual Kei's last cry of "I'm not dead yet!" as time drags it off to the black plague corpse cart.

First, we have D'ERLANGER!  One of the first visual kei bands ever, and we thought they were gone for good but it turns out they're BACK!  D'ERLANGER is not dead yet!  They'll be playing with Buck-Tick on July 7th at Zepp GundamCity Tokyo, and they'll be covering "Iconoclasm," just like J did last time.  Get a new idea guys.

Next, we have Cali-Gari!  Admit it, you really, REALLY thought that Cali-Gari, as a band, was dead forever...splat, kaput, just like maguro on the train tracks!  But no!   And on June 17th at Zepp Sendai you can see the Sakurai cousins onstage together for the first time ever (fun fact, Sakurai Ao is Sakurai Atsushi's cousin.  Really.  They have the same name and everything.)  Cali-Gari will also be covering "Misty Zone" for the tribute album...which I warrant can only be a good thing.

Visual kei artists who haven't yet become zombie bands include Merry and Mucc, who will doubtless be fanboying themselves out of their trousers, seeing as some of their members were at one point also members of a Buck-Tick copyband.  If you want to see Mucc, go to Zepp Fukuoka on June 24th, and if you want to see Merry, hit Zepp Nagoya on June 30th.  But even if you can't make it, you will still be able to listen to Merry's cover of "Aku no Hana" and Mucc's cover of "Jupiter."  I am currently taking bets on whether you think Tatsurou can beat Takanori at taking a formerly subdued Hide ballad and blowing it up into a big, huge, emo, screamo epic of Acchan-sensei fanboy homage.

Non-visual artists on the lineup include shameless American late-90's nu-metal imitators Pay Money to My Pain (July 6th at Zepp Gundam, covering "love letter"...because they are waaay too cool to sing songs with lyrics in Japanese), that rascal drinking buddy of Sakurai's DJ OZMA and his band Kishidan (covering "Machine," and playing on June 26th at Namba Hatch, where else?), and The Lowbrows (July 4th at Yokohama Blitz, and as an electronic unit, they're not doing a cover, they're remixing "For Elise.")

Other covers on the tribute album include Nshukugawa BOYS with "Empty Girl," AA= with "Mad," Polysics with "Sid Vicious on the Beach," and BREAKERZ with "Just One More Kiss"...I'm not even going to bother taking bets on whether you think this will top Kiyoharu's version, because I already know it doesn't stand a chance.  Will these artists also be playing at the Parade Festival?  It remains to be seen.  But if Pay Money to My Pain was only installed because Dir en grey had to decline due to Kyo having flayed his voice to within an inch of his life...well, then visual kei just may be dead after all.

To set the record straight.
Buck-Tick's "huge announcement" on NicoNico last night was that they are releasing another maxi-single this summer, in addition to "Eriize no Tame ni." This second single will be released on July 4th and will be entitled "Miss Take ~boku wa misu teiku~", meaning "Miss Take ~I'm a miss take~". This title is a pun, of course, on the English word "mistake," and the English phrase "mis-take," (as in, if they messed up in the studio while recording their single and had to do another take, the first take would be a mis-take.) The third element of the pun is Imai's idea that there might be a lady out there named Little Miss Take. How do I know it's Imai? I don't, not for sure, but I bet you guys five sets of Dokudanjou voodoo dolls that this one is Imai's doing. And FYI this pun has nothing to do with mystics or mysticals or mysteries or Japanese honorifics. Only with Imai Miss Spelling English words.
Anyhow, Miss Take will also come in two editions, a regular edition with no cool shit and a limited edition with a special package, and two discs. The first disc will contain three songs: "Miss Take," "Only You," and "My Baby Japanese -type II-". The second disc will be a DVD featuring the PV for Miss Take. AND it includes a photobook full of pictures of Toll looking awesome.
In other news, the track list has been announced for the live CD that will be included with the limited edition of "Eriize no tame ni." Recorded during the 2011 DIQ at Zepp Sendai, the CD will include the following songs:
1. Theme of B-T
2. Hurry Up Mode
3. Jupiter
4. Sakura
5. Baby, I want you
6. Alice in Wonder Underground
7. Dokudanjou Beauty
BUT!
As if that weren't enough, the really special announcement is that if you buy both these singles (limited or regular edition, it doesn't matter), you can send in the pair of coupons, one from each single, to enter a lottery for a chance to witness Buck-Tick's first ever PV filming open to the public.
Does this mean that if you win, your little Dokudanjou Beauty self will be featured as the star of the video, grinding your little mystical buns all over Toll's firm drumsticks? I have no proof, but I do have a strong suspicion that it doesn't. In all likelihood the PV filming will involve one of two scenarios: a group of fans stand behind a railing and squee their hearts out while Buck-Tick films a PV in a soundstage, or more likely, the PV will be filmed in a concert setting, in an intimate venue, and the lucky lottery winners will be the audience. Will the winners get to meet the band? Who knows, but frankly, I doubt it. So remember that before you spend your life's savings buying a zillion copies of each single. Just sayin'.
But if you want to buy a zillion copies of the mistake single just so that you can have a zillion CDs containing a re-recorded version of "My Baby Japanese," please email me so I don't feel so alone.
Posted by Cayce at 11:42 PM 10 comments:

For those of you who haven't seen this already, here it is.
This, I think, demonstrates quite well why Buck-Tick made the decision to start their own label. Amazing, how as soon as they break out on their own the unrelated story lines and inexplicable white girls vanish, to be replaced by simple dark interiors, interesting lighting, and artsy camera angles, all which serve to enhance rather than detract from the band members themselves, who are, after all, what we came to see. Is this a good thing? In a word, yes.
Also Imai and Sakurai seem to have melded over the years to the point that Imai is now writing lyrics that really sound like Sakurai should have written them (though I can't translate them yet because I need the official lyric sheet for that.) As for the music, we've got hints of Buck-Tick's dark late 90's period, stuff like "love letter," "heroin" and "Maria," run through the clean straight rock filter of their later sound. The fluff has been trimmed, and so has the sentimentality. Banzai.
Posted by Cayce at 11:29 PM 13 comments:

Looks like Zepp DiverCity is actually a new Zepp Tokyo that just opened, a few hundred meters away from the original Zepp Tokyo. I guess now we know that Zepp brand live houses reproduce through parthenogenesis. DiverCity is slightly bigger, and slightly farther away from the nearest train station.
I'm kind of tempted to hate on this new upstart of a venue, just because it doesn't have a Ferris wheel built on top of it. I mean, come on.
Sorry for being too lazy to look this up until now, so sue me. It must mean I'm getting old.
Also I see from Blogger.com's statistics monitor that Blog-Tick readers are much more interested in reading about Acchan-chan's nickname than about the details of Buck-Tick's new single. Clearly you have all your priorities right in line.
Posted by Cayce at 12:03 AM 4 comments:

What's in a Nickname? 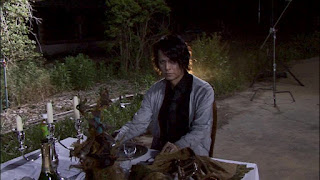 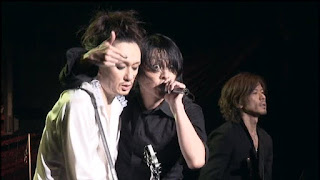 More on For Elise

From Kanemitsu Hirofumi's article in the latest issue of Ongaku to Hito (released today!) we have learned the following:
The de-facto theme of the new single is Buck-Tick's 25th anniversary, much as the de-facto theme of Rendezvous was their 20th annivesary.
The lyrics and music to "Eriize no tame ni" were written by Imai, and "Yumemiru Uchuu" has music by Imai and lyrics by Sakurai, so I was right on three out of four predictions for the writing credits this time around.
Mr. Kanemitsu (who has know Buck-Tick a long time) describes "Eriize" as "nineties electronic rock with a simple band sound." He goes on to say that the simplicity and straightforwardness of the arrangement could have so easily devolved into something trite and overdone in the hands of another artist, but Imai proves the flawlessness of his artistic sense once more by stopping just one step short of going too far, resulting in a perfect balance. In the lyrics, the line "We loved, we were lonely too/But that's not what you and I were after" hint at something much deeper than the saccharine platitudes delivered by most popular Japanese musicians these days.
"Yumemiru Uchuu" is also described as a simple song, with simple words: "For an instant, or for forever/Will we go back? Never/Dance with me." It could be a love song for Buck-Tick's fanbase, many of whom have loved the band for 25 whole years now.
The third track is a self-cover of "SANE," which reportedly comes across a lot darker than the original version. I get a feeling we got a taste of this new version on the Razzle Dazzle tour, but this looks exciting.
And which bands will be appearing on Buck-Tick's new tribute album and at the next Parade festival? Mr. Kanemitsu can't tell us yet but he claims that he wishes he could...it's that good! Suffice to say they're bands from diverse genres, but they all love Buck-Tick.
Is Soil & "Pimp" Sessions one of them? That remains to be seen. But it appears that Mr. Soil and Mr. Pimp brought their jazzy horns into Imai's studio yesterday. To what effect, we can only speculate, but Imai says it's a "killer tune." I've gotta say, I love me a good horn section. Bead and feather 'em, baby.
Will the Dead Weather also be on Buck-Tick's tribute album? I suppose not, but in the meantime I'm going to have a glass of Jack Daniels while imagining what Allison Mosshart would sound like singing "Motel 13." As Tower Records and Suntory Whiskey so astutely pointed out in their joint ad campaign, "No Music, No Whiskey." 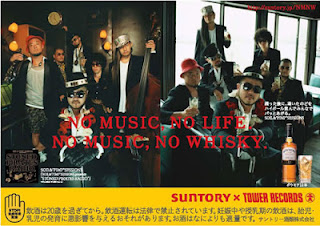 Which artists would you guys like to hear cover which Buck-Tick songs? I'll award cookie points to creative ideas.
Posted by Cayce at 10:06 PM 9 comments:

.
Yesterday, we finished mixing the vocal tracks into all the songs. 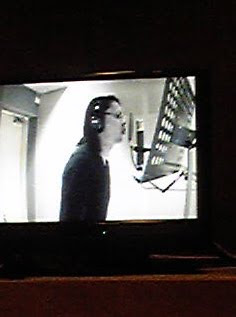 However, we still have to add parts of the backing vocals
So Mr. Sakurai can't rest yet! 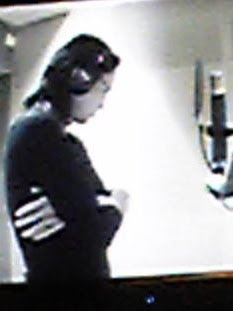