The announcements have been ringing out across Buck-Tickistan so quickly, it's easy to lose track of what's going on... and what's most important. But Buck-Tick are a band, which means that the most important thing is always going to be music. And this is it, kids: they're releasing a new single!

Entitled Babel, Buck-Tick's first new music release since last September's Atom Miraiha No. 9 will be released on November 15th, and will contain the following two tracks:

The video disc in the limited editions will contain the music video for "Babel." In addition to including a video disc, the limited editions will also be contained in special packaging and come with a "playpass download" for easy smartphone listening, available until November 30th, 2018. If you're wondering what "playpass" is, don't ask us - our phone is far too stupid to know.

Customers who purchase either of the limited editions from select Tower Records, HMV, Tsutaya, Shinseido, or Bunshindo outlets, or purchase the limited editions online through Amazon, Rakuten Books, or the Victor Entertainment shop will receive a special extra in the form of an A5 sized commemorative photo. Blog-Tickers who would like to order this single through Cayce, just shoot us an email.

A few notes on this release - "sayonara wo oshiete" means "tell me goodbye." I guess Mr. Sakurai had to add a subtitle to the song title, seeing as he already wrote a song entitled "Moon" for The Mortal. Takkyuu Ishino is a member of famed electronic music unit Denki Groove, and in addition to his work with Denki Groove, he often performs solo shows as a DJ in his own right. In fact, we've seen him play live, and he's a lot of fun, so if you're into trance and dance, go check him out. Whatever Victor's other failings, hooking Buck-Tick up with another talented eletro musician surely not going to be one of them. Those of us who loved "Melancholia -Electria-" should really be looking forward to this release. As for the title of the single, it undoubtedly refers to the Biblical story about the Tower of Babel, an origin story on why human beings speak so many different languages. However, we'll save our notes and analysis till after the single is released and we can look at the lyric booklet.

In the meantime, here's Buck-Tick's new promotional photo, and we're tremendously pleased to see them looking so naturally decorated with the dignified lines of middle age, rather than photoshopped into Glowing Plastic Visual Kei Bishonen Barbie Dolls of Death (tm). And Fish Tank, if you see us sharing this and it pisses you off - fuck you. This is a promotion photo. The whole point is for people to share it to promote the band, which is what we are doing here. But just in case, once more, with feeling, in Japanese: プロモ写真なのでシェアさせていただきます。是非皆さん、B-Tのシングルを100枚でもご購入下さい！ 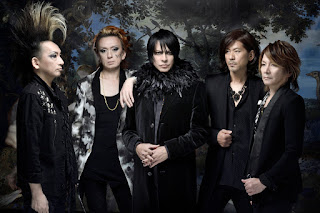 (Now everyone, on the count of three, help us blow a giant raspberry together! On your mark... one... two... three... BLFFFFT! Bonus points if you got some drops of spittle on Acchan-chan's face.)
.

Anyhow... Babel might have been the end for the universal language, and for humanity's chance at building the stairway to Heaven, but it's only the beginning of the news from Buck-Tickistan! Since Babel was all about building a tower, it seems fitting that Buck-Tick's second bit of news concerns the new opening of Tower Records Takasaki. This new shop will be located on the 7th floor of OPA Takasaki, and will open for business on October 13th, to much promotion and fanfare, including lots of promo for Takasaki's hometown boys, the Buck-Tick members. Promotions will include the following: 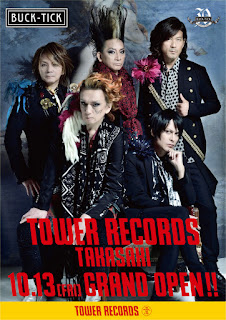 Takasaki's a 3 hour train ride from Tokyo by local train, but those of you who are in the area in October may want to go check it out.

As an aside - those of you who are tremendously offended by Cayce's use of keigo in the above Japanese disclaimers, please leave a comment on this post expressing how offended you are and next time, we'll write up a post on how to use some basic keigo phrases. Bonus points if you include some sweeping racist stereotypes of Asians in your comment, for extra realness. Because if there's one thing we've learned from some of our Russian readers (a very small "some" - most of our Russian readers are lovely!), it's that not only is it possible to be a homophobe and yet still be a self-declared fan of a band as queer as Buck-Tick, it's also possible to be racist against Asians and yet still be a self-declared fan of a Japanese band. Humanity's capacity for cognitive dissonance is a stunning, breathtaking thing of beauty. (For the record: we, Cayce, unequivocally reject and repudiate all forms of racism, homophobia, and other isms that contribute to making the world a shitty place, and we encourage y'all to cut that shit out immediately, and if you're in the mood, go punch a Nazi while you're at it. Fighting violence with violence isn't really the solution to a problem but ooooh boy does punching Nazis make for a good meme, and everyone knows that good memes are the main ingredient of a successful life! Meme away!)

But wait... there's more from Tower! Turns out Tower Records Takasaki doesn't get to hog all the hoopla for itself after all. In addition, giant posters autographed by the Buck-Tick members will be displayed in the following Tower Records outlets: Shibuya, Shinjuku, Kinshicho, Sapporo Pivo, Nagoya Parco, Diver City, and Takamatsu Marugame. In addition, the above outlets will also be providing the following Buck-Tick related fun and games for y'all:

-A message board where you can write comments to the band (we wrote ours last night in Shibuya... see if you can spot it!)
-Buck-Tick promo videos on the video screen outside the store
-Limited edition goods for sale

and last but not least...

Kids, the purikura machine is magical. We tried it last night. For the ridiculously inflated price of 500 yen per photo, you can take a photo booth photo with a band member of your choice, which will be printed on postcard-size glossy photo paper labeled with the Tower Records and Buck-Tick logos. You've only got two chances at the photo per 500 yen spent, so make sure you have your pose planned in advance. You can slap them, you can snog them, you can give them bunny ears or the finger! The only limit is your imagination. This is your chance to pose for a photo with Acchan-chan. Don't waste it!

Here's the purikura machine in action. Notice how the sample photo of Acchan-chan-sama-chan has already been stolen by a rabid fangirl. 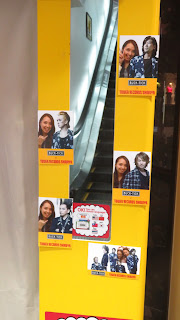 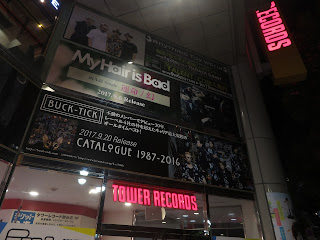 And some visual kei fanboys fanboying together over Buck-Tick on what is definitely, surely not a gay man date. 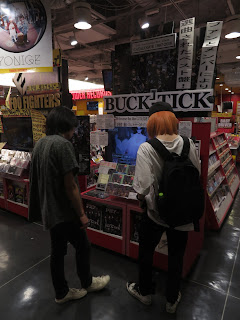 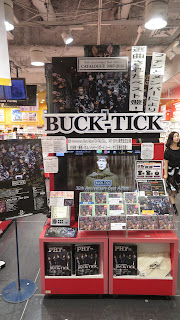 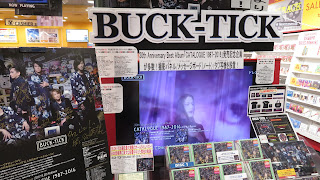 Note how the top of the display is decorated all over with not one, but a whole horde of Kurumi cutouts. 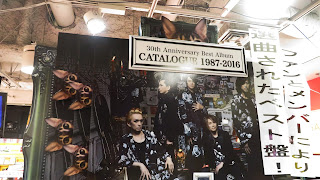 The message board... can you spot our message? 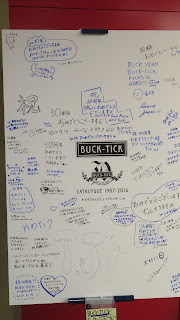 In still other (and definitely less interesting) news, Victor is pissing itself with pleasure to announce that they've posted special congratulatory comments on the Buck-Tick 30th Anniversary website. The comments are mainly from journalists, producers and directors who've worked with the band, and while these people certainly have a good perspective on Buck-Tick's work, their comments are by and large boilerplate platitudes, and thus very boring to read. Victor, don't you know that the kinds of comments fans want to read are the ones from the band's musician friends, rife with in-jokes and simmering with thinly disguised homo-eroticism? Come on, now. If you don't work harder, you might find that The Hisashi Inquirer will go out and solicit these comments instead of you... and if that happens, loose tongues might waggle more than you'd be comfortable with. What you won't provide to the fans, the fans will take for themselves! Is that a threat? Probably ;) We'll let you decide.

But wait, there's more! As we might have expected, there is another Buck-Tick ad truck on the loose! It'll be driving around the west-central side of Tokyo between Shibuya and Ikebukuro until September 24th, so if you're out and about in the city this week, see if you can spot it! If anyone manages to get pictures, please send them over to us. We'll be happy to post them.

Oh, wait! There's even more! Volume 10 of PHY magazine is running a cover feature in honor of Buck-Tick's 30th anniversary. It's 1400 yen, and it's out right now. If you'd like to order it through Cayce, shoot us an email. 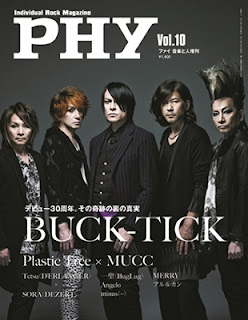 Anyhow, that concludes our news for today. Whew, what a long post, and we have so much more work to get done before the day is done. If we don't see you tomorrow, we'll see you at the festival.