We went. We saw. We ate desserts.

Those of you who read our review of the previous Tower Records Buck-Tick Cafe event last year may find this familiar. The cafe is located on the second floor, and this time, like last time, there were band members welcoming us in, and beckoning us into both the stairs and elevator at the same time. 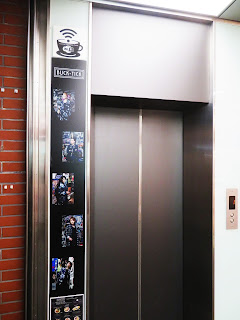 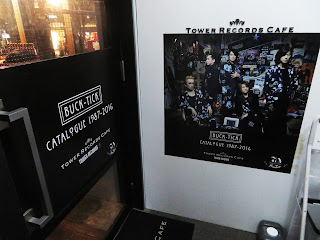 Inside, the layout was similar to last time. The walls were covered with a variety of posters and photo panels, while a large projection screen played a non-stop series of Buck-Tick live DVDs throughout the day. The bar counter overlooking the windows was lined with empty Buck-Tick beer bottles and empty bottles of Toll's Doramu sake, while shelves at the back and sides of the room housed stupendous collections of goods and magazine back-issues. 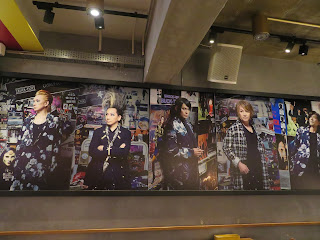 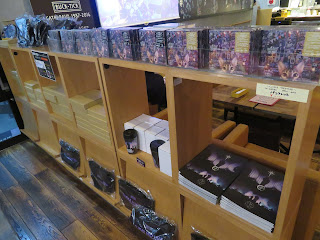 All those Buck-Tick: The Climax goods that no one bought. They're still here! 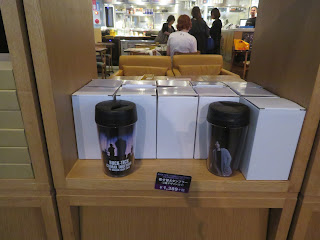 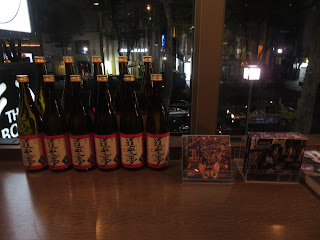 A shrine of empty Doramu bottles. Those of you who drank that shit - the joke's on you! But we're getting ahead of ourselves here. 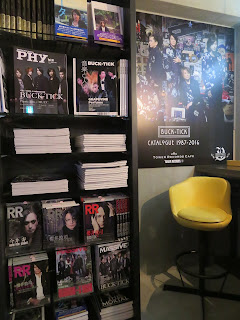 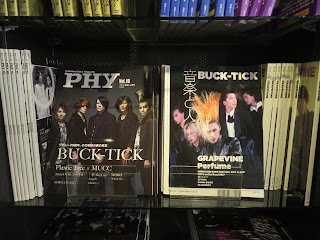 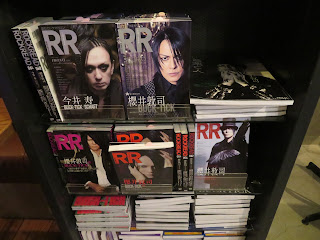 *For those of you who were not aware, Mr. Sakurai and Mr. Imai have been legally married since 1987. This is objectively verifiable fact and it's on file in the Family Registry of Buck-Tickistan. In fact, 2017 is not only Buck-Tick's 30th anniversary year, it also marks the 30th year of the Imai-Sakurai marriage. Despite being the wife, in defiance of Japanese law, Mr. Sakurai reserved the right not to change his surname upon marriage. He may be the wife, but he's a man, after all. Name changing is for women! Also Buck-Tickistan doesn't have stupid sexist laws like that. 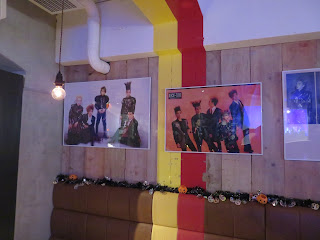 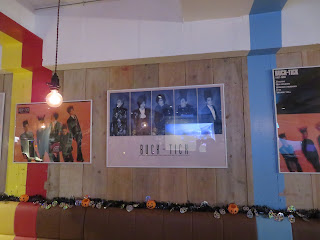 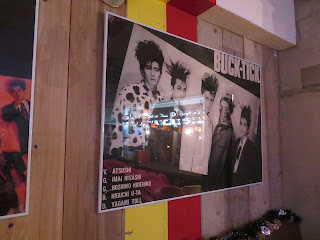 There are no non-Victor posters of B-T anywhere in this cafe.

As might be expected, the clientele skewed almost 100% female. Most of the men we spotted on our multiple trips to the cafe were either salarymen who'd wandered in by mistake, or the long-suffering husbands of Buck-Tick fan-mamas, who politely averted their eyes as their wive's eyes practically popped out of their sockets upon the predictable appearance of Mr. Sakurai's thighs during the "Seven Deadly Sins" and "Romance" sections of the Atom Miraiha live DVD. In fact, we found it amusing that no one else in the cafe seemed to notice that, far more than Mr. Sakurai's thighs, it was the fans' reactions that were the real source of entertainment. Mouths gaped, throats gasped, cervixes pupils dilated and we even witnessed one woman drop a whole big white sticky blob of sex whipped cream out of her Sapphire dessert and onto her lap. Someone with an active Buck-Tick copyband: please allow us to join you as a guest vocalist for a cover of Buck-Tick's classic hit, "My Eyes & Your Thighs"! It's our lifelong dream!

Also, honest question... if you have a husband already... haven't you... you know... done... the thing...? How is it still so mysterious as to cause you to drop your dinner in your lap? Did storks bring you babies after all? 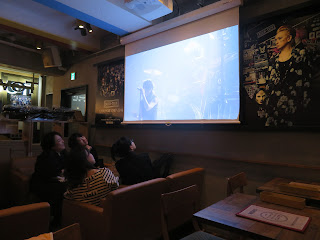 But now the real question: what about the food?

Overall, the Tower Records Cafe serves an excellent menu, and since their themed items are usually just tweaks on their overall style, it's no surprise that the themed foods this time were just as tasty as last time, if a little ho-hum. Not being in a meat-devouring mood, we declined to sample the Moon Lights or the Baby, I Want You. However, we dug into those desserts, and how! On the first round, we tried both the Serenade and the Angelic Conversation, pictured below. 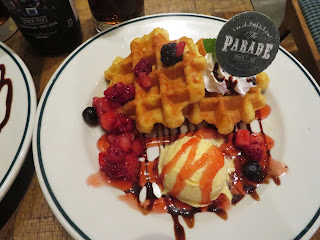 Angelic Conversation (Did it contain Imai-approved fairy dust? Verdict: No.) 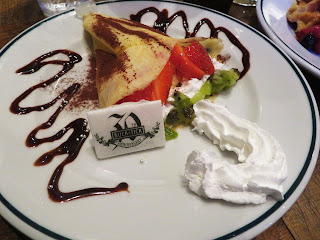 Serenade Umbrella Sweet Baby Sweet (oh shit that was definitely a different song that definitely wasn't all-ages cafe appropriate!! If any of the rest of y'all want to eat a slightly overripe and brown-spotted chocolate banana stuffed inside a rafflesia-themed strawberry crepe slathered in honey and garnished with a sunflower in honor of the continuing brilliance and relevance of "Sweet Baby Sweet" to the cultural history of Buck-Tickistan, please, for the love of fuck, join us! But more on that in another article.) Anyhow, as you can see, the Serenade is umbrella shaped, with a whipped cream handle and fruit ruffles. How, well, sweet! 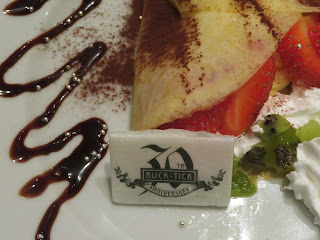 Get a load of those silver non-pareils! Extra points for the fact that this was, in fact, real whipped cream, and not that fake canned stuff Americans eat. As previously, the label is printed in edible ink on a rice cracker and is 100% safe to stuff into your pie-hole (we did and we're not dead yet. We think.)

Oh yeah, and our little nightcap wouldn't have been complete without a beer and two Cuba Libres - one each for ourselves and our accompanying Buck-Tick fangirlfriend ;) You can't have a Cuba Libre without a Bonita, now can you? 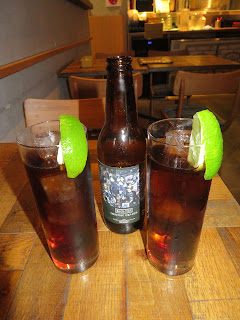 Again, points for the Cuba Libre. It was neither too sweet nor too weak! A true triumph, especially since Cayce hates Coca-Cola and somehow enjoyed this drink. (Coke lovers: fucking fight me!)

The second installment of the cafe featured some sweet Halloween-themed decor. And now I feel at pains to point out that, contrary to popular belief, no one in Japan except for Genet and the Tokyo Dark Castle crew even knew what Halloween was until about five years ago, and the decoration and celebration thing really only started in 2015... but you wouldn't know it from the thick layer of plastic Jack-O-Lanterns and cutesy witch decals encrusting every available surface in the entire Tokyo metropolitan area since October 1st. Japan, you're reminding us of that rich teenager who all of a sudden decided to be "goth," bought the entire Killstar fall collection with her dad's credit card, and is now swanning around the club bragging about how she saw She Wants Revenge live at this year's Cloak & Dagger Festival in LA and that makes her Cooler Than You, and you haven't the heart to tell her that the Cloak & Dagger Festival hasn't actually happened yet. (Real talk, Blog-Tickers, is anyone going? We are jealous of you and we hate you. Just kidding. Get the bartender to mix some blackcurrant syrup into some beer for you, drink it and think of us.)

Anyway, this is all by way of saying, don't believe it when Japan says that she and Halloween are totes tying the knot. They just started dating two minutes ago. But they are sure putting up a lot of couple selfies on InstaSpace in a vain attempt to compensate for the shallowness of their relationship with public display. 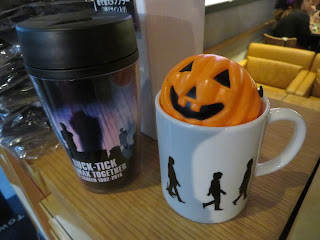 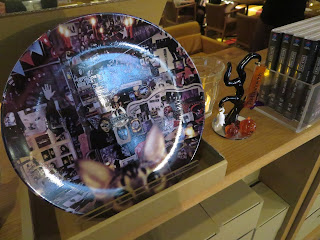 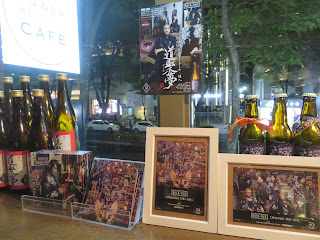 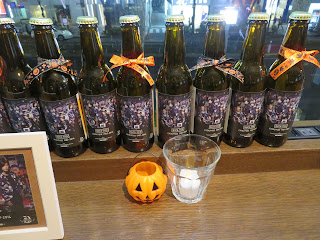 This time, we sampled another two desserts: the Sapphire and the Kuchizuke. While the Sapphire got our hopes up by advertising itself as Warning: Contains Pineapple-Flavored Sex! we were slightly disappointed due to the high whipped cream to sex ratio (Whipped Cream: 1, Sex: 0), and also to the generally weak pineapple flavor in the visually arresting but rather tasteless blue jelly. 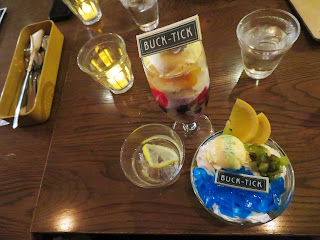 Altogether more satisfying was the Kuchizuke, which perfectly balanced fruit, cream, cheesecake cubes and ice cream on top, then delivered a very nearly sexual shock with the appearance of the chocolate mousse down below. Looking at it is not the same thing as tasting it, folks. It was so good we went back and ate another one later. So I guess you could say that second one was... wait for it... just one more kiss!!! (Dig that kissmark on the glass).

But what's in the other glass, you ask? Oh yeah... that would be Toll's Kick Doramu highball - that is to say, Toll's signature Doramu sake on the rocks, with a twist of lemon.

We regret to say this, kids. We really do. Because we love sake, and we love Toll. But not even rocks and a taste of lemon could save this sake. The Onikoroshi stuff you can get in juice boxes for 100 yen at the convenience store tastes better that this stuff (fun fact: the 100-yen convenience store Onikoroshi is actually surprisingly good! One time we won a free one in a convenience store lottery and the girl behind the counter couldn't believe we'd want it and tried to give us a soft drink instead till we got annoyed and told her we wanted our Onikoroshi thank you very much and she gave us the Most Surly Teen Look Ever. Bad jorb manners, girl! But I digress.) Far from tasting like the way to dreams of divine musical pleasure, Doramu tastes like sake mash dissolved in water with a little neutral grain spirit added for alcoholic content. Sake mash, or sake-kasu as it is known in Japanese, is commonly used as a seasoning in foods, especially soups and simmered or grilled fish. It contains a wide array of amino acids, and as a fermented food, it's a particularly healthy choice for supporting your gut bacteria. Plus, it adds an excellent wallop of umami to deepen the flavor of any unsatisfactorily seasoned meal, all with that lovely distinctive sweet-grainy hint of koji mold. In cooking, we can't get enough of this stuff.

Does this bad review mean that we're turning into an old man who harumphs at pierced teenagers and yells at clouds? Maybe, but we hope not.

And a bonus round... Buck-Tick delights ordered by friends of Not Greatest Site, shameless ripped off Instagram with full permission! 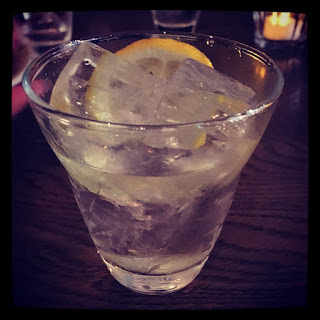 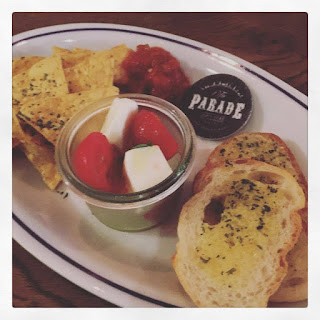 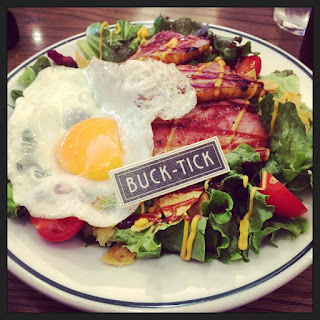 Baby, I Want Your Bacon! 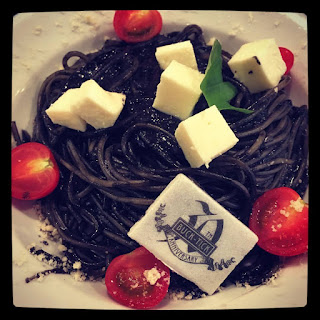 And Miss Take pasta! That's cheese on top. Not tofu. In fact, it's a young mozzarella, which means that in all reality and truth it is... GREEN CHEESE! (*Firecrackers and champagne corks and cheers*) 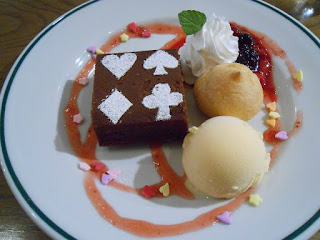 ...and the Serious Matcha Bear, which grows a beard as you drink it! Guess this bear is one of *those* bears after all (wink wink, nudge nudge). 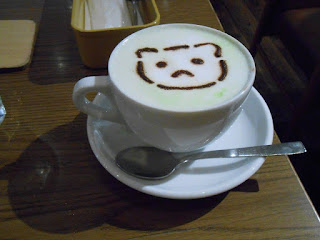 In conclusion: it was fun. It was tasty. We're now done eating sugar for the rest of the year. And if you're in Tokyo, run back to Tower - because last time we checked, the purikura machines were still there. We'd share with you the purikura we took, but it's all NSFW. 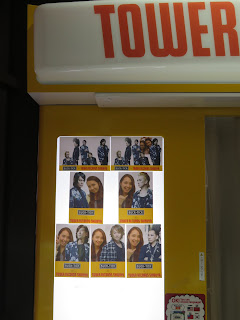 Now just ask yourself, how is it even possible to make an NSFW purikura? That's for us to know and you to find out. Till next time. Eat your cheese, live long and prosper.
Posted by Cayce at 11:44 PM